Music City Revival is a Live Music Show and the vision of Producer/Music Director Dan Hagen, featuring some of Music City’s finest talent performing with Dan Hagen’s A Team House Band. Music City Revival is having it’s first show on Sunday March 22nd 5-8:30pm at the Local in Nashville, TN and will be supporting Lij Shaw and his goal to save Home Studios in Music City that are currently illegal according to a Davidson County Ordinance. We are looking to bring the local and community together on this issue to make a difference so we can continue to record music in Music City. 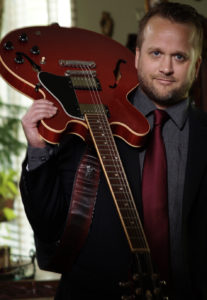 Dan Hagen released his debut cd as an artist entitled “The Journey” at Music City Liberty Festival in Nashville, TN at Marathon Music Works Sat. Nov 3rd 2012 which is a combination of Funk/Soul/Groove/Jazz Fusion and Latin music. Dan proudly endorses Gibson guitars, Dunlop/MXR pedals and D’addario strings. Dan has a bachelor’s degree in Jazz performance/Classical Guitar from the renowned University of North Texas. Dan has been teaching guitar for over 25 years, has taught at clinics for major universities and currently teaches guitar at World Music in Bellevue and Corner Music as well as his studio in Nashville, TN.

As a Producer /Composer for TV/Radio, Dan has arranged and played guitar/Dobro on music for several reality shows on CMT(MTV Networks) such as “Man vs. Vegas”, “Trick my Truck” and “Coyote Ugly”. Dan also did music for Miss America on CMT and the playstation 2 game CMT Karaoke Revolution. Dan produced and wrote the new “Tennessee Lottery” radio jingle “Mountains of Cash” and produced and played guitar on the “Tennessee Lottery” jingle Quick 7’s and most recently “Weekly Grand Blues” and “Diamond Dollars”. In 2008, 3 of the Jingles Dan produced for the Tennessee Lottery were nominated for the “Addy Awards”. In 2008 Dan did a national TV/Radio jingle for “LP” Which aired on ESPN, Monday football and all Radio/TV stations in Atlanta, Houston and Seattle as well as being played at all Titans games at LP field. Also in 2008 Dan wrote/produced and played guitar on the theme song for Hulk Hogan’s reality show on CMT called “Celebrity Championship Wrestling”. In 2012 an original song Dan wrote called “Under My Skin” was played during CBS college sports games. In 2013 an original song called “Nashville” was featured on CBS This Morning. In 2013 original song “Under My skin” that Dan co-wrote and played guitar and dobro on was featured in a MTV film. In 2016, Dan’s production for Cat Beach’s EP won her IMEA Blues Artist of the year. In October 2016, Dan Hagen Band performed in Roatan, Costa Maya and Cozumel as featured artist on Royal Caribbean Cruise lines. In 2017, Dan’s co-write on the song “Nashville” was featured in AT&T/IHeart Radio’s “About to Break” Series. In. October of 2017 Dan Hagen Band performed in Haiti, Jamaica and Cozumel as featured artist on Royal Caribbean Cruise lines. In 2018, Dan Hagen Band was featured entertainment on Holland America Cruise lines in California and Ensenada, Mexico. In 2018, Dan’s original song “Get to higher ground” and production became the theme song for the Bob Murphy show podcast. Much of 2018, Dan was on tour with the Voice Artists 2 Steel Girls. In 2019, Dan Hagen Band will be featured entertainment on the Celebrity Cruise line in Seattle, Alaska and Victoria, British Columbia. Dan is set to go on a USO tour with 2 Steel Girls that will include Japan. In 2019, Dan Hagen will release his second recording project as artist, “The journey continues”. Dan is also busy writing with and producing other artists and music for film/radio/tv, as well as performing all over Nashville, the US and overseas.